Cycle for Sight 2017 brought 250 participants to the SERF, Nat, and Princeton Club West on Saturday,  March 11th.  Riders hopped on spinning bikes to raise funds for vision research at UW-Madison.

Teams that participated in previous years – Kenzi’s Team, Blind Take Off, Out of Sight, the Retinal Research Allstars, Team Tiradani, and others – were back, along with new teams.  Teams raised over $53,000 in gifts for vision research this year!  We will announce a date for Cycle for Sight 2018 soon, so stay tuned. 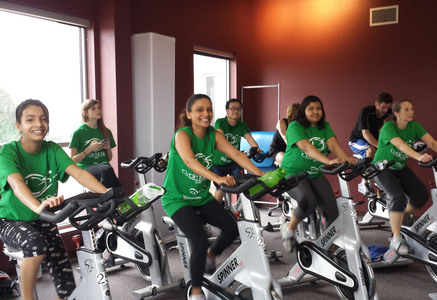 This year’s Cycle for Sight ride, which took place on Saturday, March 12th at the Princeton Club West and the Nat and SERF on the UW-Madison campus, raised  $35,000 for vision research at the McPherson Eye Research Institute.  Our annual indoor cycling fundraiser was a great opportunity to meet and ride with others in the community vested in the fight against blindness.

Last year’s top fundraising team, Kenzi’s Team, was once again the first place team, raising $6350.  Kenzi’s Team had participating riders as far away as Kuala Lumpur.  The Blind Take Off team came in second, with $5265 raised; they were followed by the Retinal Research Allstars, with $3230.  Two dozen other teams participated, with many of them raising over $500 per team.

We’re very grateful for the support of all our participants and donors, and hope that everyone enjoyed the ride!

Chip & Christy Kaufman, captains of the Cycle for Sight team Out of Sight, are the winning bidders on both a football signed by UW Badgers football coach Paul Chryst and a basketball signed by UW Badgers basketball coach Greg Gard.  For $150 each, the Kaufmans have continued their outstanding participation in Cycle for Sight, and gained two great pieces of UW-Madison memorabilia.  The McPherson ERI is grateful for their support.

Christy and Chip Kaufman ride in Cycle for Sight.  Chip has a degenerative vision condition, and Christy rides for Chip:

I used to complain about my commute to work when Chip and I lived in Chicago, not realizing how easy I had it.  When Chip’s vision deteriorated to the point he had to surrender his drivers’ license, he committed to riding his bike to work regardless of weather conditions.  I used to beg him not to ride because I worried for his safety, and I was extremely frustrated with him for refusing to give it up.  It took me a while to realize that for Chip, this is not about being stubborn.  This is about maintaining independence and showing courage in the face of adversity.  It is about maintaining control over a senseless disease.  When I hop on my indoor bike to support the University of Wisconsin McPherson Eye Research Institute, I will be envisaging Chip who rides in the wind, snow and rain, proving to our children that you never, ever, ever give up.

Christy and Chip rode with the Out of Sight team this year!

Cycle for Sight 2015 raised more than $26,000 for vision research through the McPherson ERI!  The grand-prize winning team — Kenzi’s Team, captained by Nancy Valentyn – raised $6,305! Kenzi’s Team rode for an extraordinary young woman, Kenzi Valentyn, who was profiled by Channel 3000 in the lead-up to Cycle for Sight. Their team turnout was memorable, including team members who participated simultaneously in Kuala Lumpur!

Other prizewinning teams included Blind Take Off, the second-place team, which raised a fantastic total of $4,947; Out of Sight, last year’s top fundraising team, which raised $3,325 this year; and the Retinal Research Allstars, which finished in fourth place with $1,930, and ranked as the top McPherson ERI-affiliated lab team.

Vision loss can be devastating. Much of what we learn from the world around us comes through our eyes, and our ability to do many tasks in our daily lives depends on our sight. It’s not surprising that people rate their fear of vision loss second only to their fear of cancer. Millions of Americans suffer from significant visual impairment. In Wisconsin, estimates indicate that as many as 100,000 residents are blind or visually impaired and many more are believed to have eye conditions that may potentially result in permanent vision loss. Leading scientists believe that the major causes of blindness can be cured within the first decades of the 21st century. Please help McPherson ERI investigators advance our knowledge of vision loss by participating in Cycle for Sight!