Credentials: Department of Cell and Regenerative Biology
(School of Medicine and Public Health) 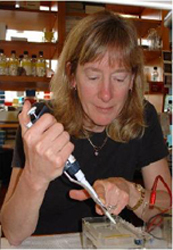 Research Interests
Dr. Griep’s research focuses on the genetic and molecular regulation of mouse eye development and disease. The coordinated regulation of cell proliferation, differentiation, and death is critical for normal development and for maintaining the specialized functions of differentiated tissues in the adult. Failure to maintain proper controls can result in birth defects, diseases of proliferation, such as cancer, and a host of degenerative diseases. In the Griep lab, they are investigating the genetic pathways and molecular mechanisms through which cell proliferation, death, and differentiation are regulated during normal mouse eye development and how disruption of these controls leads to disease. They focus most of our efforts on the lens, but also have interests in other parts of the eye, such as the retina and cornea. The lab uses a variety of genetic, molecular, cell biological, and embryological techniques, with transgenic and knockout mice and associated tissue culture systems.

The lab’s work has focused on three aspects of how lens differentiation is controlled at the molecular level. First, the work led to the understanding that the tumor suppressor protein pRb is essential for lens cells to withdraw from the cell cycle and differentiation, in part through its regulation of the activity of E2F transcription factors. The pRB family of proteins also appears to be essential for maintaining normal growth rates in the less differentiated, proliferating cells of the lens. More recently their studies have identified a new family of tumor suppressors, that of the discs-large family, DLG, as also being important for regulating normal cell growth and differentiation in the lens. Second, their studies addressed the mechanism of how lens cells eliminate their organelles, which occurs normally as lens cells differentiate.  They now understand that certain members of the caspase family of proteases, the proteases that mediate apoptotic responses, are involved in regulating organelle loss. Finally, the FGF signaling pathways appears to be a regulator of multiple stages of lens cell differentiation and survival.

Two focus areas of the lab’s current and future work are: (1) to further elucidate the mechanisms through which pRB and DLG families of tumor suppressors control growth and differentiation in less differentiated, proliferating cells as well as in the differentiating cells of the lens; and (2) to identify the molecular pathway including caspases and DLG that regulate organelle loss in the lens and the relationship of this pathway to apoptosis. From this work, they hope to learn more about the mechanisms that regulate normal eye development and how dysregulation of these mechanisms can lead to ocular disorders such as cataracts, retinal degeneration and tumor formation.