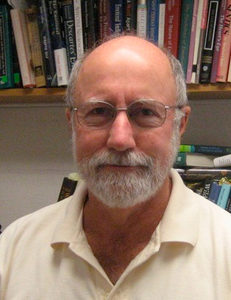 Research Interests
Deric Bownd’s 35+ year laboratory career resulted in many discoveries in the chemistry of vision.  Dr. Bownds came to the University of Wisconsin’s Department of Zoology and Laboratory of Molecular Biology in 1968, having done PhD and postdoctoral work at Harvard that identified the lysine site of attachment of retinal in rhodopsin, the first modern protein chemistry done on the visual pigment rhodopsin. In the early 1970s he discovered and characterized the light induced phosphorylation of the visual pigment rhodopsin that is a fundamental component of the on/off response of rhodopsin to light. In the mid-1970s his lab discovered that light induces a decrease in cyclic GMP levels within milliseconds of light absorption. This was the initial step in its identification as the internal transmitter of rod and cone photoreceptors. A series of studies on calcium, cyclic GMP, and cyclic GMP phosphodiesterase in permeabilized rod outer segments led to the proposal (subsequently verified) that calcium levels fall on illumination, contrary to the prevailing model. The laboratory then developed techniques to prepare frog rod outer segments with attached inner segment Ellipsoids as an in vitro model for photoreceptors on the retina, and carried out a series of studies simultaneously measuring chemical and electrical changes that follow illumination of photoreceptors. Further studies through the 1980s and 1990s characterized the chemistry and regulation of light adaptation, the cyclic-GMP gated rod conductances, cyclic GMP phosphodiesterase subunits, rhodopsin kinase, recoverin, etc. A final complete model of the gain of rod phototransduction, a collaborative multi-laboratory study reconciling biochemical and electrophysiological measurements, was published in 2000. By the early 1990s, Bownds had developed a parallel interest in studying how our minds work, leading to publication of the book The Biology of Mind in 1999. Since his retirement in 2001, he has continued to study, lecture, and write on cognitive neuroscience and on the evolution, structure and function of human brains.