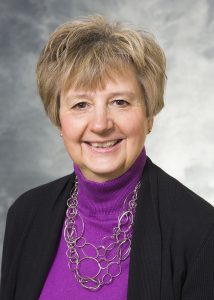 Research Interests
Donna Peters’ laboratory studies the role of cell-matrix interactions in the anterior chamber of the human eye in order to better understand the cause of glaucoma, one of the world’s leading causes of blindness.  Glaucoma is believed to be a defect in mechanochemical signaling events that serve to maintain normal levels of intraocular fluid in the anterior chamber of the eye.  Peters’ laboratory researches the types of cell-matrix interactions occurring in the anterior chamber of the human eye and the types of signal transduction events that they control.  Dr. Peters’ laboratory has shown that interactions with an extracellular matrix protein called fibronectin help modulate the levels of intraocular pressure in the human eye and the movement of fluid through the anterior chamber. They have identified the domain in fibronectin that regulates intraocular pressure, as well as at least two signaling molecules whose function is controlled by this domain. Her lab is currently looking for the receptor that interacts with this domain and which characterizes the components of the signaling pathways and the biological processes governed by this interaction. Her long-term goal is to identify potential extracellular and intracellular targets that can be used to control glaucoma via genetic approaches such as gene therapy.