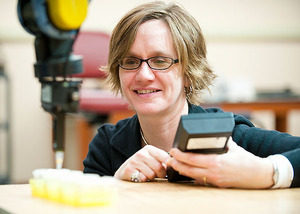 Research Interests
Nicola Ferrier was a professor of mechanical engineering at the University of Wisconsin-Madison from 1992-2012, and is now at the Argonne National Laboratory in Chicago, IL.  She is a past member of the Leadership Committee of the McPherson ERI.

Dr. Ferrier’s interests are in the use of computer vision/imagery to control robots, machinery, and devices. She is focusing on computer vision and other robot sensor systems, with applications as diverse as medical systems and navigation.

Her current work concentrates primarily on visual and tactile sensing, developing models for visual control of motion and grasping, looking to separate motion control and visual control into subsystems.

A key competency required in order to use vision for motion control (grasping or manipulation) is to be able to locate and track a target, and conventional visual servo control requires continuous tracking of a target, at great computational expense. We are looking to relax the continuous tracking requirement.

Past projects include work in visual and tactile sensor design and operation, work on a visual tracking system for automated traffic monitoring, and the construction of a robot “head” with a 7-degree-of-freedom system in which the two “eyes” (cameras) could pan, tilt and verge much like the human eye.