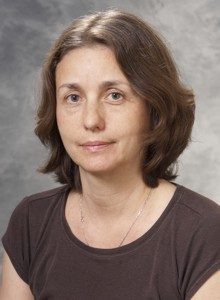 Research Interests
The Grinblat lab studies choroid fissure (CF) closure, an important step in retinal morphogenesis, during zebrafish embryogenesis. There is a fundamental gap in our understanding of the genetic and cellular mechanisms that control CF formation and closure. We have identified a novel role for zebrafish Zic2a, a conserved zinc-finger transcription factor, as a key modulator of Hh-regulated gene expression in the forebrain and retina, and demonstrated an essential role for Zic2a in CF morphogenesis. We are working to identify Zic2a effectors and analyze their functions during CF formation. This approach is expected to advance our understanding of how Hh signaling coordinates patterning and morphogenesis during retinal development, and to build a strong foundation for analyses of other important but poorly understood functions of Zics, including their roles in neural tube closure, neuronal regeneration and tumorigenesis.