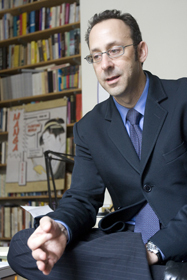 Research Interests
Professor Kern’s work revolves around the visual-verbal imagination in Japanese culture of the early modern and modern periods. He is the author of Manga from the Floating World: Comicbook Culture and the Kibyoshi of Edo Japan (Harvard University Asia Center, 2006) and copious articles, translations, and book reviews. His current work includes a monograph on literary Nonsense, a co-edited translation anthology, and The Penguin Book of Haiku (forthcoming from Penguin Classics). His institutional affiliations in Japan include the University of Kyoto, the University of Tokyo, and the National Institute of Japanese Literature. He has worked as a staff reporter for the Japanese-language newspaper Kyoto Shimbun and as an intern in the editorial office of the manga weekly Young Magazine. He currently directs the Center for Visual Cultures at UW-Madison.