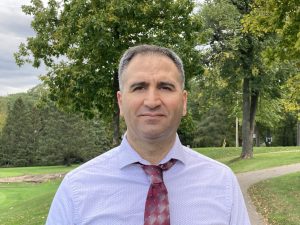 Extremely premature children face many health issues, including a strong risk of vision loss. Retinopathy of prematurity (ROP) is a leading cause of visual impairment and loss in these children, affecting more than half of the 0.72% of babies born in the United States weighing 2.75 lbs or less. ROP is driven by the sensitivity of developing retinal vasculature to changes in oxygen levels in premature newborns, the reason for which remains unknown.

Ismail Zaitoun, PhD, an Associate Scientist and a principal investigator in the Department of Ophthalmology and Visual Sciences, who collaborates with Drs. Sorenson’s and Sheibani’s groups, has focused on retinopathy of prematurity at the cellular and molecular levels, hoping to treat the root causes of this devastating disease. Dr. Zaitoun has zeroed in on a family of proteins called Bcl-2 (studied extensively by Dr. Sorenson), one of whose members—called Bim—appears to have an important role to play when the developing retinal vasculature receives too much oxygen (hyperoxia), destroying blood vessels, or too little oxygen (ischemia), which causes blood vessels to grow too profusely.  In Dr. Zaitoun’s experiments in a mouse model with Oxygen-induced retinopathy (OIR), deleting Bim globally protected the growing blood vessels from either negative effect.  Interestingly, deleting Bim in a targeted way, aiming at individual vascular cell types without global deletion, did not show the same protective effects.

In his recently funded R01, Dr. Zaitoun is performing experiments to determine the exact roles played by Bim expression and by another protein, vascular endothelial growth factor (VEGF), in the inner retinal neurons and their impact on hyperoxia-induced vascular damage during Oxygen-induced ischemic retinopathy. Figuring out the precise mechanisms of action undertaken by these proteins should allow for targeted therapies to prevent retinopathy of prematurity and its accompanying vision loss.

Additionally, Dr. Zaitoun investigates the impact of hypoxic-­ischemic insult on retinal vascular integrity and function. A great majority of surviving children with hypoxic-­ischemic encephalopathy (HIE) display visual impairments. These impairments are usually associated with injuries to certain parts of cerebral visual systems. In addition, emerging evidence suggests neuronal damage in the retina following HIE. However, how these changes are brought up in the retina, and whether retinal vascular damage contributes to the compromised vision remains poorly understood. Dr. Zaitoun’s studies show a significant defect in the retinal vascularization in animals subjected to HIE.