Between September 24 and December 17, 2021, you can see the winners of the 2020 and 2021 Cool Science Image Contests in the Mandelbaum & Albert Family Vision Gallery on the 9th floor of the Wisconsin Institutes for Medical Research.

This is the 7th year that the McPherson ERI has partnered with University Communications to showcase the contest’s entries. UW Communications is grateful for Promega Corporation’s support of the Cool Science Image competition. 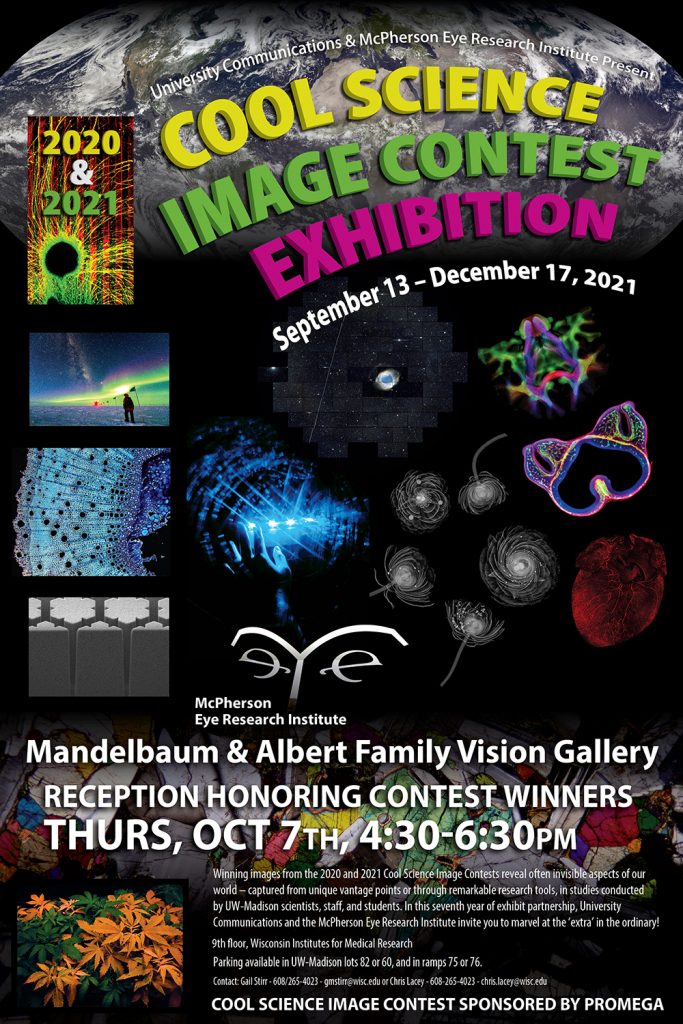 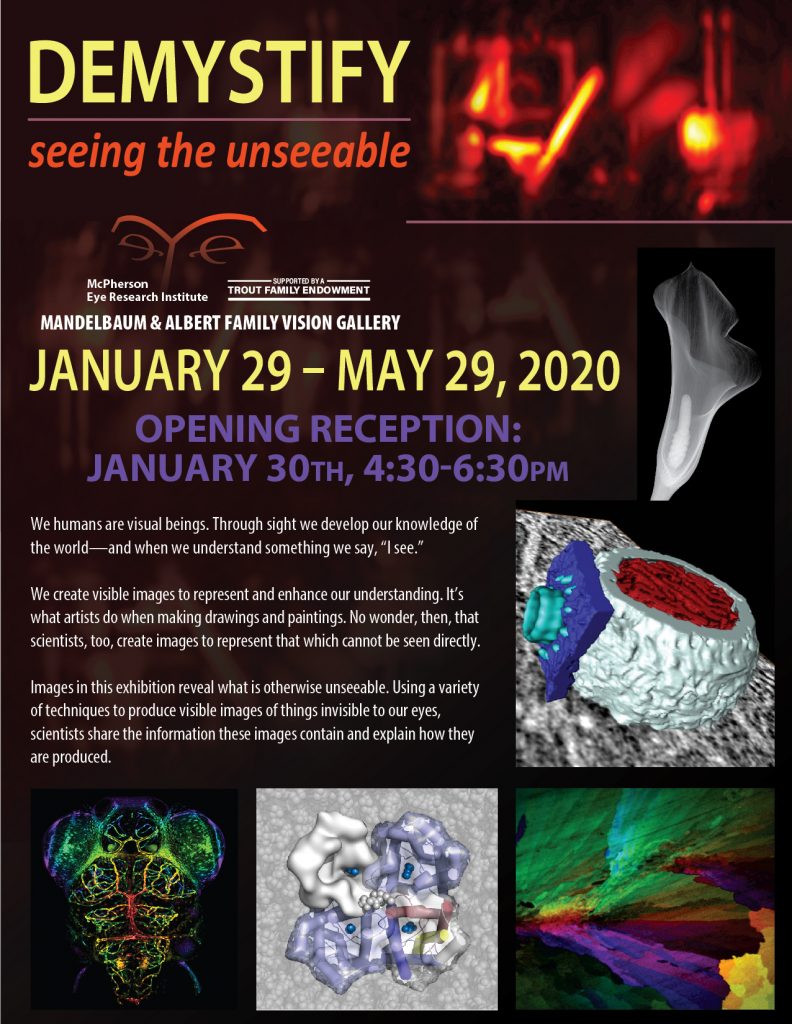 This is the 5th year that the McPherson ERI has partnered with University Communications to showcase the contest’s entries. UW Communications is grateful for the Promega Corporation’s support of the Cool Science Image competition. 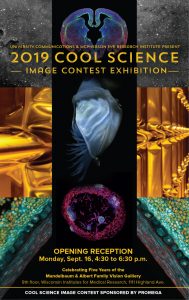 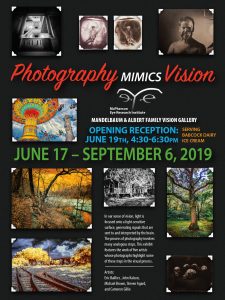 In our sense of vision, light is focused on a light-sensitive surface, generating signals that are sent to and interpreted by the brain.  Photography involves many analogous steps.   This exhibit features the work of five artists whose photographs highlight some of these steps in the visual process.

Your Brain on Abstract Art

The subject of this exhibition is YOU, specifically how your brain interprets what you see and how abstract art affects your perception, memory, and emotions. Abstract art in a range of styles evokes a variety of responses – some of which are determined by the artist, and some that are of your own creation. 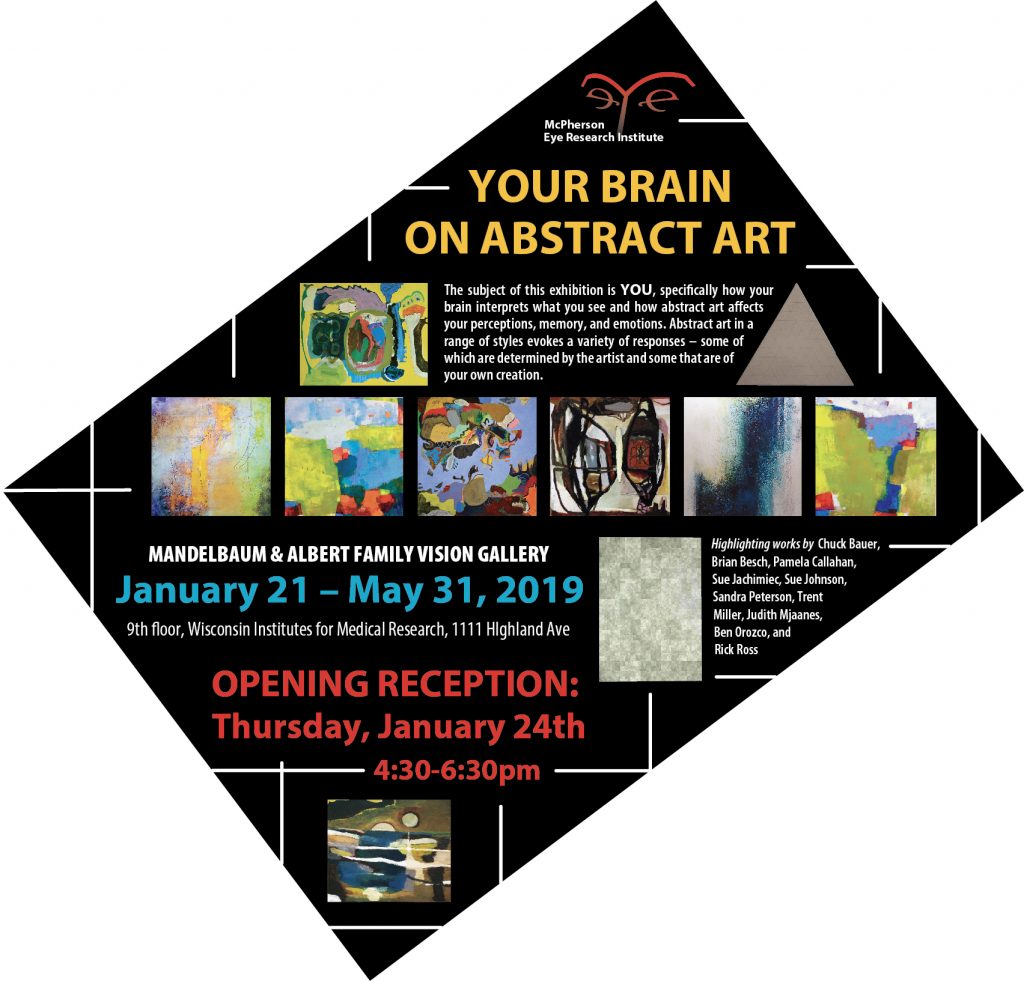 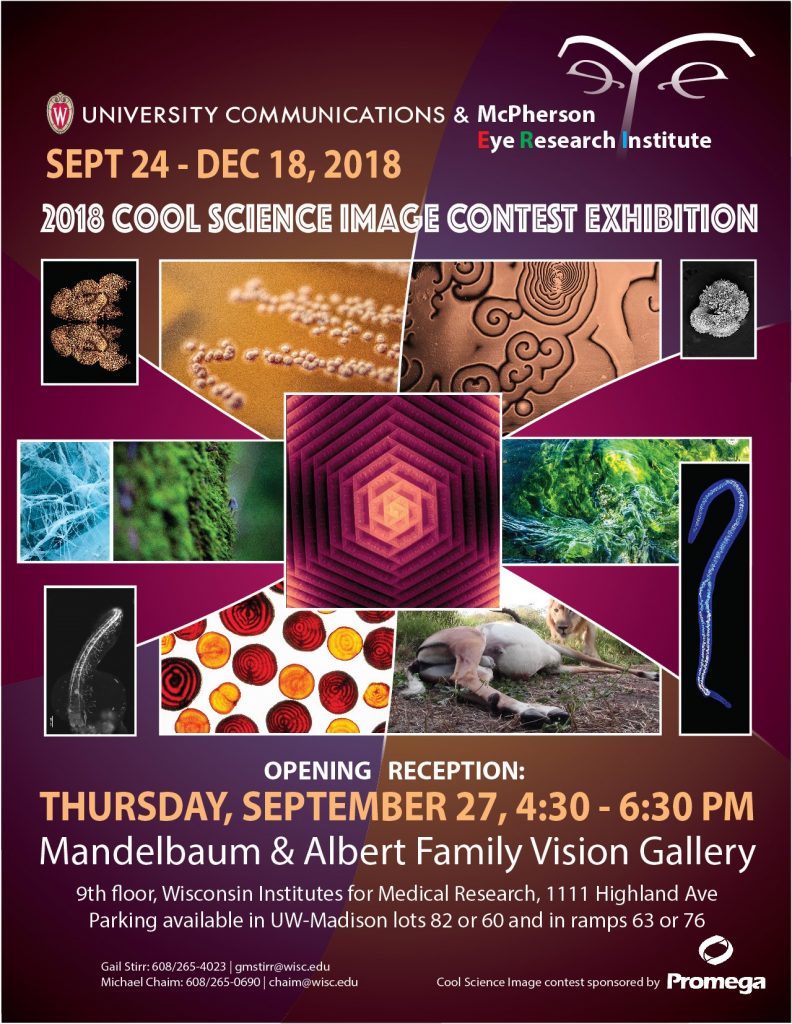 and students from across the UW-Madison research landscape. The intent of the contest is to draw out the alluring but oft-hidden features of the natural world—cells, molecules, and stars among them—which are key to research and studies undertaken on campus.  University Communications was pleased to partner with the McPherson Eye Research Institute to showcase the winners of the 2018 contest.

We are grateful to Promega Corporation for Cool Science Image competition support.

An exhibition featuring artworks from nine current or past faculty and staff of the University of Wisconsin-Madison, whose artistic pursuits are avocation rather than vocation.  Featured artists: 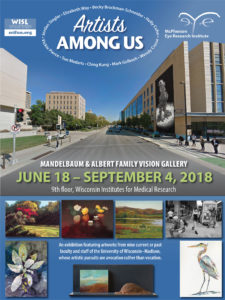 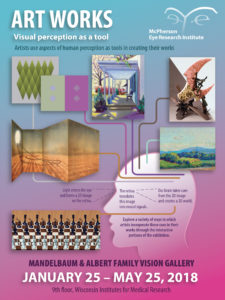 This exhibition explores various ways in which artists employ aspects of human perception in producing the essential effects of their works.

ART WORKS was discussed in the Wisconsin State Journal. Here is a one-page copy of the State Journal article.

Each year for the past six years, scientists from across the UW-Madison research landscape have participated in the “Cool Science Image” contest. The intent of the contest is to draw out the alluring but oft-hidden features of the natural world—cells, molecules, and stars among them—key to research and studies undertaken on campus.

is pleased to partner with University Communications to showcase the winners of the 2017 contest. We are grateful to Promega Corporation for Cool Science Image competition support.  (Frog photo by Joseph McDonald) 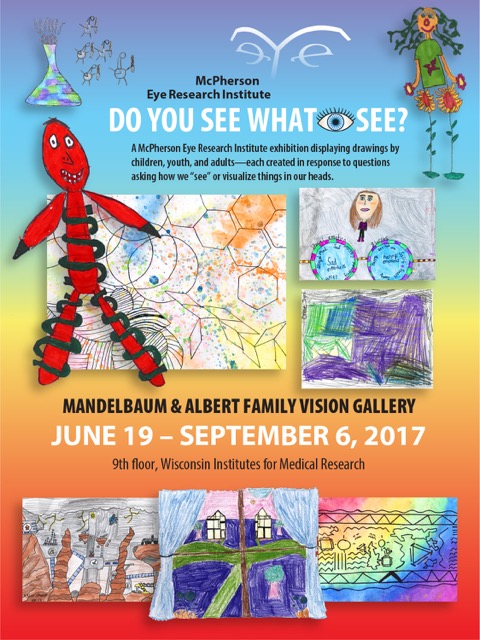 The summer exhibition in the Mandelbaum & Albert Family Vision Gallery (9th floor, Wisconsin Institutes for Medical Research) features drawings by children, youth, and adults—each created in response to questions asking how we “see” or visualize things in our heads. 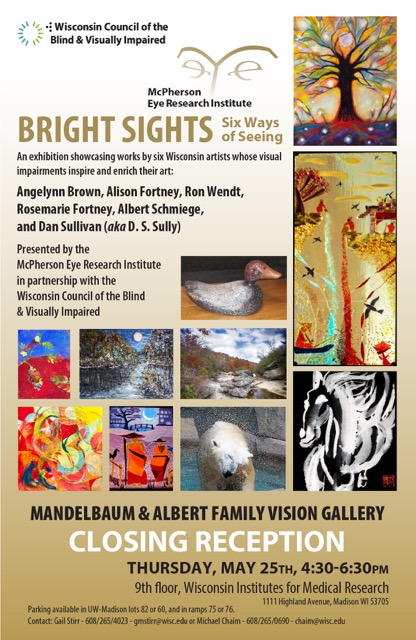 Exhibition cosponsors — Wisconsin Council of the Blind & Visually Impaired and McPherson Eye Research Institute invite you to the Mandelbaum & Albert Family Vision Gallery, on the 9th floor of the Wisconsin Institutes for Medical Research, for an exhibition showcasing works by six Wisconsin artists whose visual impairments inspire and enrich their art.

Artworks are available for purchase, and may be purchased after the exhibition closes by contacting the artists.  Artist contact information is available through the McPherson ERI. All proceeds go to the artists. 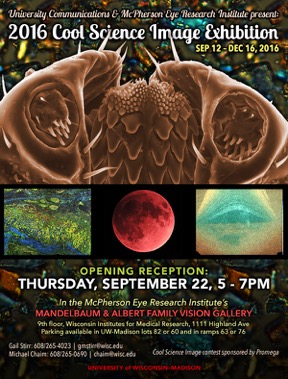 For the past five years, scientists from across the UW-Madison research landscape have actively joined the Cool Science Image contest. The intent of the contest is to draw out the alluring but often obscured imagery Wisconsin scientists use to convey their work. University Communications is pleased to partner with the McPherson Eye Research Institute to showcase the winners of the 2016 contest. We are grateful to Promega Corporation for Cool Science Image competition support. 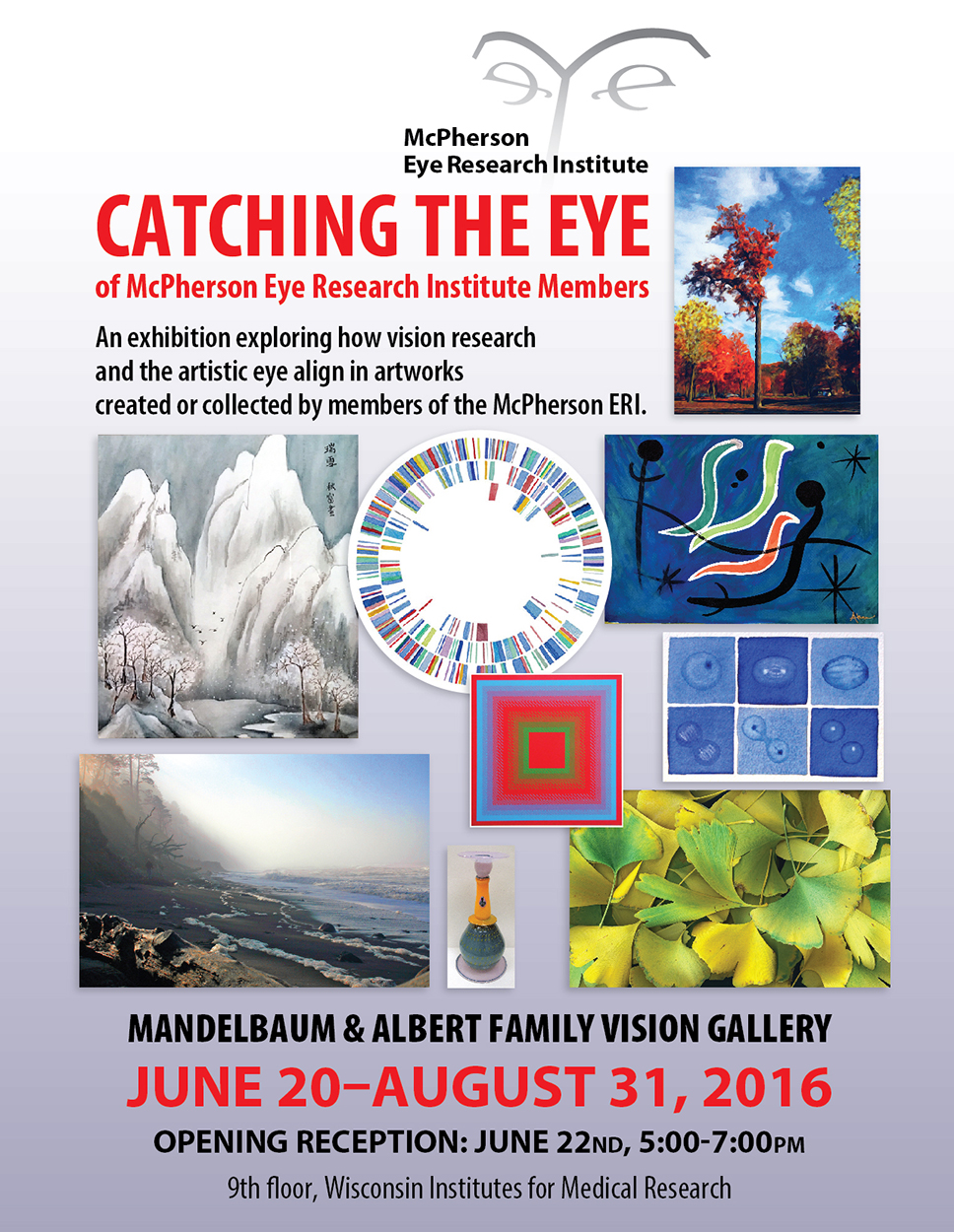 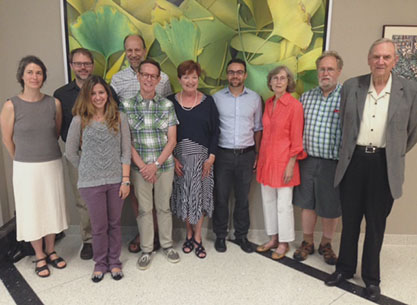 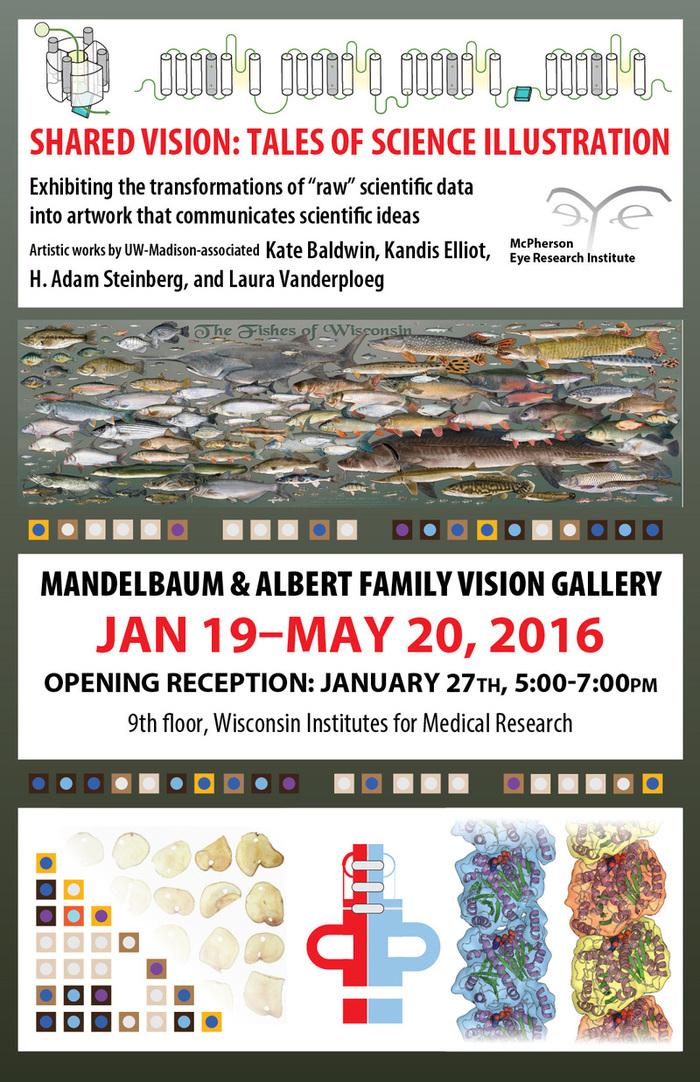 Artworks by Kate Baldwin, Kandis Elliot, H. Adam Steinberg, and Laura Vanderploeg were on display, along with explanatory text which showed how scientific data has been transformed into engaging artwork that communicates scientific ideas. 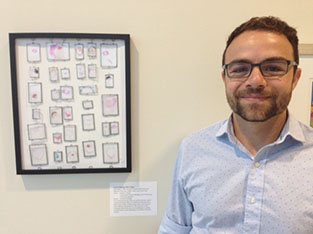 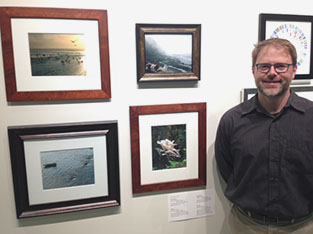 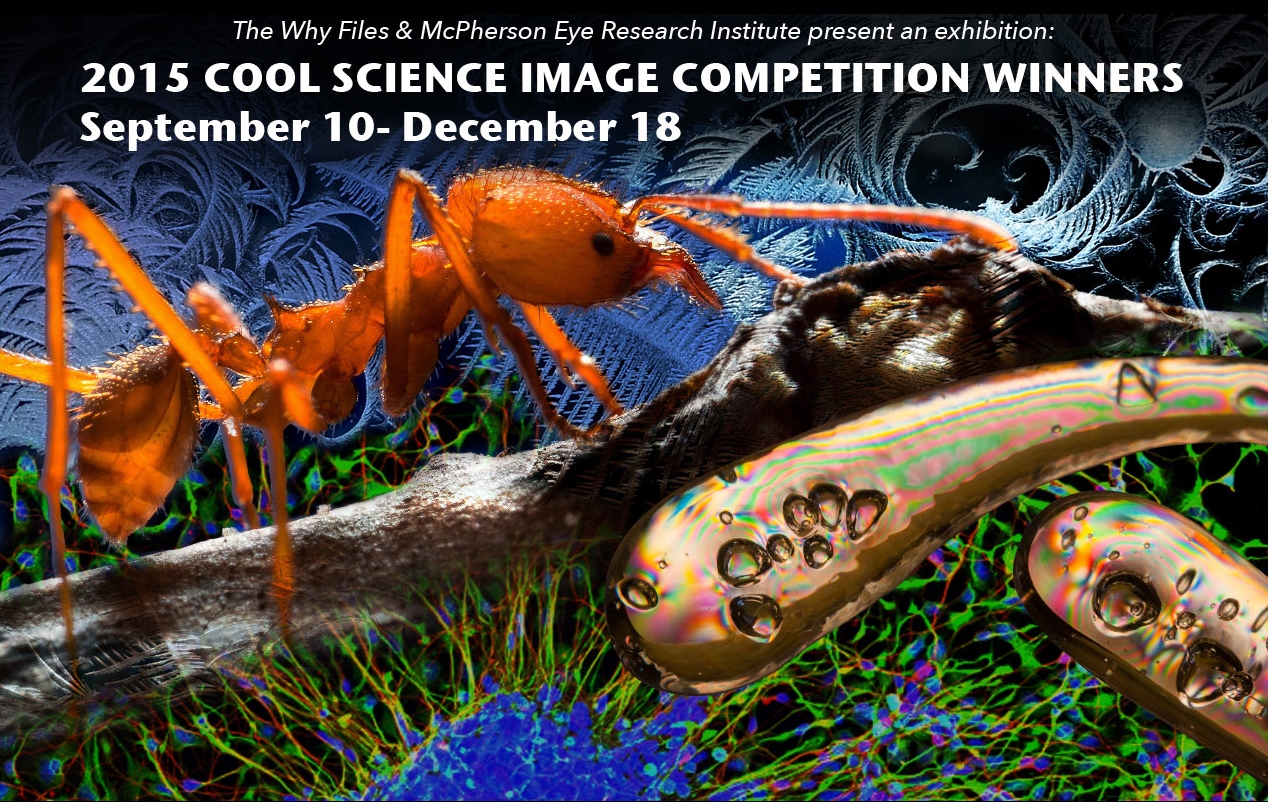 Each year for the past five years, scientists from across the UW-Madison research landscape have actively joined in the Cool Science Image Contest, sponsored by the popular science magazine The Why Files. The intent of the contest is to draw out the alluring but often obscured imagery Wisconsin scientists use to convey their work.  The McPherson Eye Research Institute is pleased to partner with The Why Files (with the generous support of the Promega Corporation) to showcase the winners of the 2015 contest in the Mandelbaum & Albert Family Vision Gallery, located on the 9th floor of WIMR II, 1111 Highland Ave. 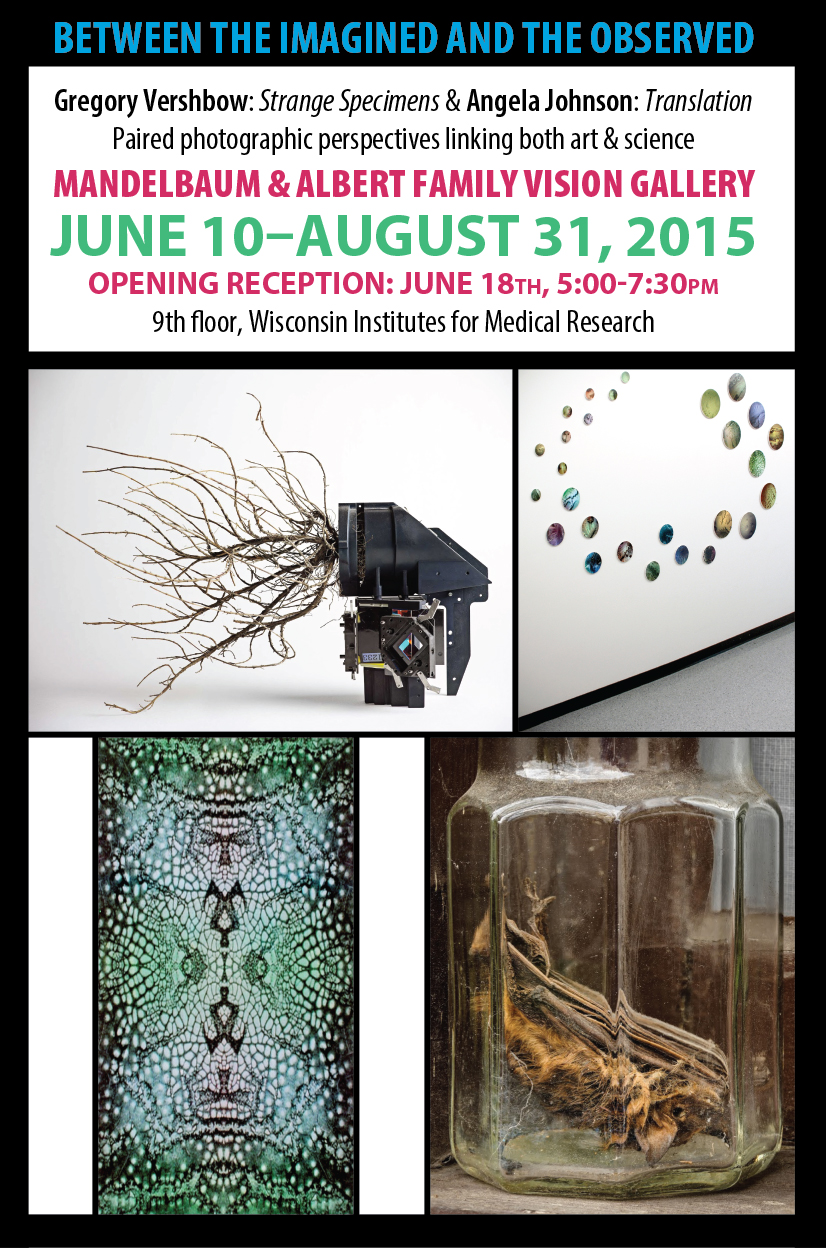 Between the Imagined and the Observed
Gregory Vershbow: Strange Specimens and Angela Johnson: Translations

Gregory Vershbow’s photographs in Strange Specimens hinge between the imagined and the observed. On display were photographs from his larger oeuvre, which consists of photographic series and narrative books that combine his photography with original drawings and text. Joining the history of science with art history, and working both digitally and with experimental chemistry, he seeks an alternative experience of the past and present, as noted in his artist’s statement.

Gregory Vershbow received his MFA from the Massachusetts College of Art and Design in 2010 and holds a BA in photography and biology from Hampshire College. His books and photographs have been exhibited in solo and group exhibitions in the US and Europe and can be found in permanent collections which include the Art Institute of Chicago, the Getty Museum, and the National Academy of Science.

An organic thing only begins to rot as new life is born from it. Photography is a medium deeply affected by anxiety about stability: anxiety about whether or not a subject can be captured swiftly enough to be arrested in a moment, anxiety about the archival qualities of prints, and anxiety about how physical and digital manipulation of an image can compromise the medium’s integrity as a means of preserving places and things. The naturalist has the same anxieties about the world. Specimens must be isolated and preserved so they can be clearly compared to other things. They must be altered, cut, and stained in order to be observed. The idea that observing a subject arrests it in an artificially limited state was intended to describe the lives of particles, but nowhere is this idea better illustrated than in the arrangements of bones displayed in a vitrine or museum.

Angela Johnson’s series Translation strives to visually engage viewers in the correlation between photography and science, two seemingly disparate worlds. In the creation of her work, Johnson collaborated with Ahna Skop, a McPherson ERI member and genetics professor at UW-Madison. Skop runs a lab studying C. Elegans (worm) embryos as a model organism, looking at many cellular processes including mitosis. Using a pipette as an artistic tool, Johnson “paints” on agar plates with liquid bacteria to which she has added color pigment, composing imagery of these tiny microcosms using high-powered microscopes as cameras. She then photo-documents the bacterial growth, as well as the breakdown of the agar plates, over days and weeks. These microscopic images of bacteria over time take on the appearance of macroscopic forms in nature such as coral reefs, snowflakes, or topographical maps. Angela Johnson is currently in the MFA program at UW-Madison, with a focus on photography. She comes to that program after several years of teaching elementary art in Houston, Texas, which inspired her 2008 completion of an MA in Art Education at UW-Madison and ensuring work with exhibits, education programs, and as arts coordinator at the Madison Children’s Museum. 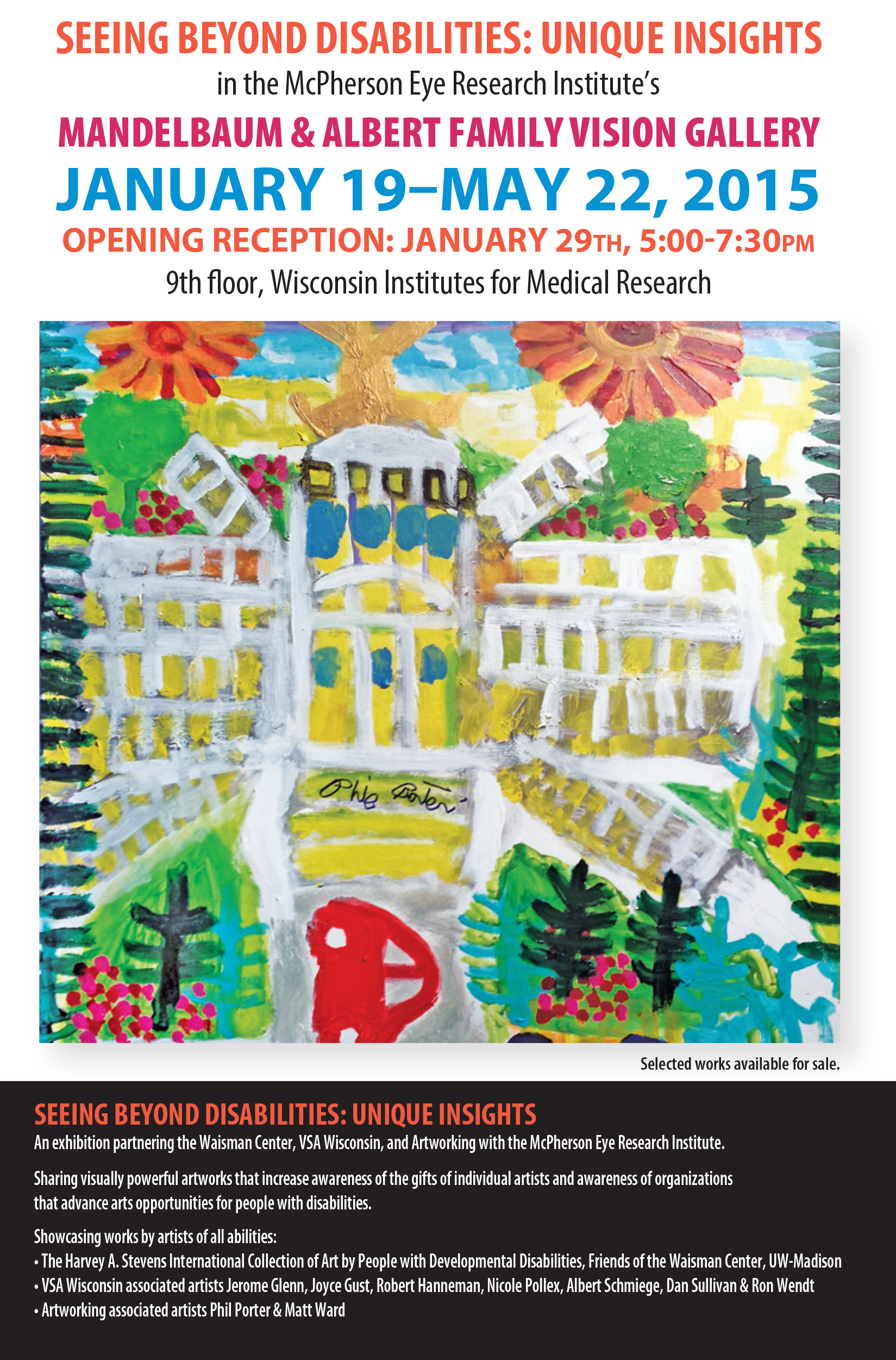 “Seeing Beyond Disabilities: Unique Insights” displayed artworks by gifted Wisconsin artists associated with VSA Wisconsin and ArtWorking, as well as works from the Harvey A. Stevens International Collection of Art by People with Developmental Disabilities at the Waisman Center.

This unique exhibit shared visually powerful artworks that increase awareness of the gifts of individual artists and awareness of organizations that advance arts opportunities for people with disabilities.

Photos from Seeing Beyond Disabilities Exhibit 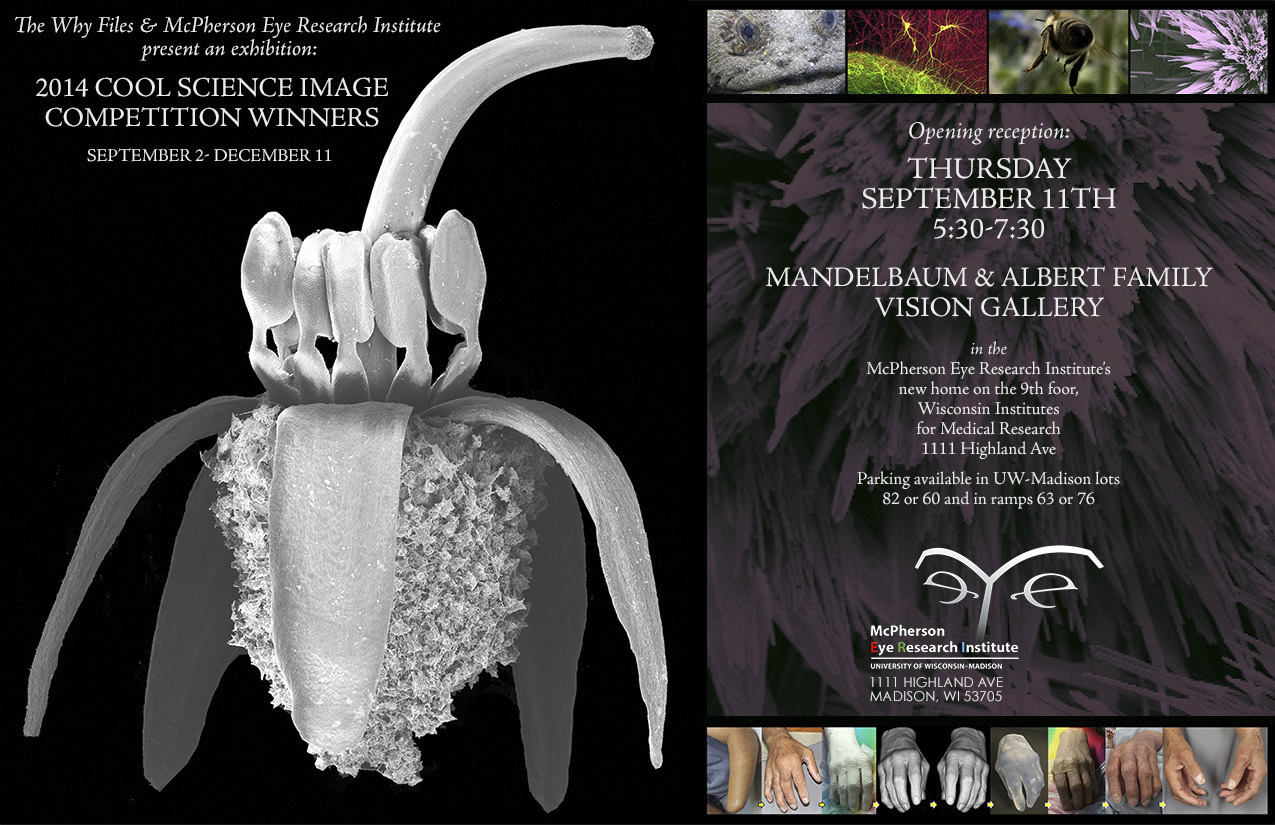 The Annual UW-Madison Science Image Contest is only open to the faculty, staff, and currently enrolled students. Individuals or teams may enter, and images can depict an object or phenomenon from any discipline and in any medium, such as, but not limited to, microscopy, photography (astronomy, nature, etc.), animations and (short) videos, medical imaging, science-as-art, schematics, and photography of your own 3D printing. Images are judged on aesthetic and informational qualities. Scientific imagery, of course, is intended to help scientists. It is a critical form of data in many fields and can yield important and sometimes striking insights into nature and the way things work. But the pictures and other images of science can also have remarkable aesthetic qualities that the nonscientist can also appreciate. 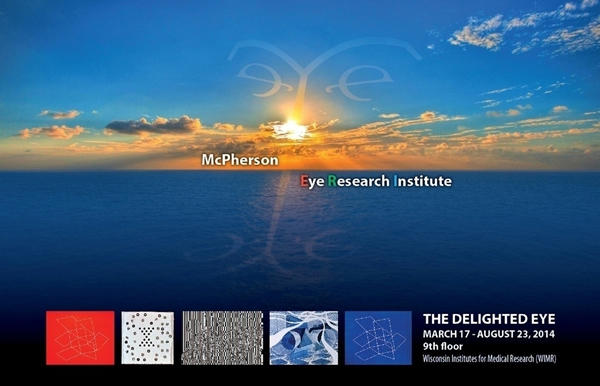 The inaugural event in the Gallery was the Delighted Eye Exhibit and featured works from UW-Madison’s Tandem Press. As a publisher of contemporary fine art prints that is a self-supporting unit of the Department of Art in the School of Education, it was founded in 1987 and was designed to foster research, collaboration, experimentation, and innovation in the field of printmaking.

Photos from the Delighted Eye Exhibit